Double Your Sales With Email

Below is an email I got not long ago, along with a screenshot of some traffic stats he pulled up about my Email Players domain, with a rather ironic typo in the subject line.

Subject line: PROOF: You are a lair

I have been following you for the past 4 months and finally found out what you do and say about email marketing is a complete B.S.

See your websites traffic analysis (in the attachment)

With a huge list and sending daily emails, how can one get such low traffic? 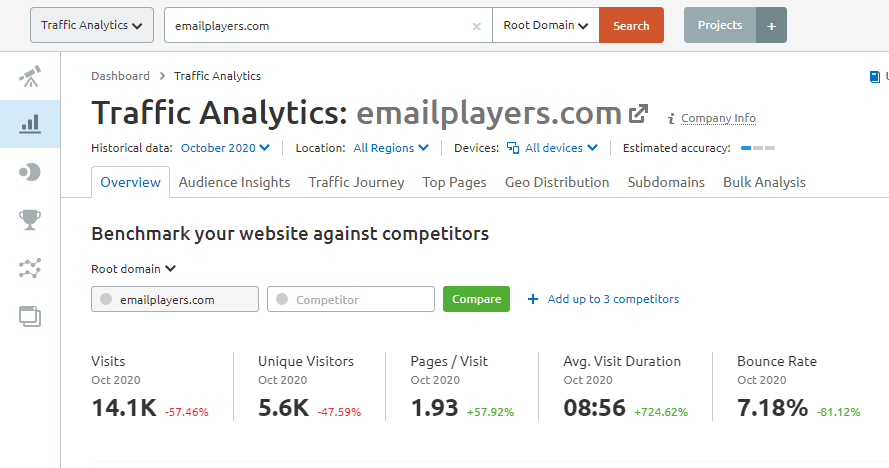 I’d rather watch paint dry than stare at my site’s stats & metrics. I’m more a fan of how Henry Ford built his empire according to his autobiography, focusing primarily on my work & service (what I can control) and not on the numbers/stats/metrics/sales (what I cannot control).

But, from what I am seeing, I kinda like them numbers.

And I don’t think the poor schlub is doing this troll thing right.

In fact, when I forwarded it to to my pal, computer scientist, and SEO/AdWords/traffic “puppet master” Jim Yaghi (we’ve been comparing our tales of trollery since 2008, it’s like a game for us), he was just as amused as I was:

“bro your bounce rate is RIDICULOUSLY low and your average visit duration is ridiculously high. This dumbass didn’t notice those, only the number of visits. That’s 5,600 very engaged visitors.”

But, there’s more to this story:

A true “the irony writes itself” phenomenon happening.

Specifically, that typo in his subject line calling me a “lair” instead of “liar.” Because for completely different reasons than he grunted out, I AM both a liar and, in a sense a “lair”, too.

And I figured I might as well come clean about it.

Here’s what I mean:

I am currently hard at work on my next book.

It’s about how I once created the proverbial social media “cult” (not my words, but many of those who were inside it) via my old elBenbo’s Lair Facebook group. And, also, how others can do the same thing I did to potentially get people literally addicted to hearing every word you say and all but frothing-at-the-mouth to buy everything you sell.

And loath as I am to admit it, this makes me a bald-faced liar twice over:

1. As I told Stefania upon completion of my last book (“elBenbo Press”), “I’m done — not writing any more fugking business books for a long while now. Just fiction.”

2. Inside that same book I boldly declared I had no interest in or would ever bother writing a book about social media. I also declared social media “stupid” in the book, too.

Yet here we are…

Anyway, as far as the above book goes:

I’m having a blast finally assembling all my notes & ideas & antics I plotted out to run and make a lot of loot from that group before I abruptly killed it off and pissed off a whole horde of people in the process. But maybe they’ll forgive me when they see how I’m methodizing the exact same game plan I used, so they can do something similar on most any social media platform they choose — Facebook or otherwise. And especially with the social media platform “Email Players” subscriber & enterprise-class software developer Troy Broussard & I are creating specifically for businesses (which will work in perfect harmony with my old elBenbo’s Lair methods) who are sick of all the incessant de-platformings, surprise bannings, privacy-mining, and anti-business crackdowns imposed by big tech social media platforms.

The only other thing I’ll say about my upcoming book for now is this:

It won’t work nearly as well if you don’t know how to build a relationship with your email list beforehand.

Otherwise, there’s no point in buying it.

So if the upcoming book interests you, I suggest rapidly implementing what I teach in my “Email Players” newsletter starting right away, and well before I launch the book next year.

P.S. Not long after sending the above email calling me a lair, troll boy asked:

1. Which of your products will you recommend for a newbie like me?

2. Is there a way I can get access to all the Email Player Newsletter from the beginning?

What Others Are Saying

Good copy intoxicates me. Yours is high proof. I’m enjoying it.

I think Ben is the light heavyweight champion of email copywriting. I ass-lo think we’d make Mayweather money in a unification title bout!

Matt Furey www.MattFurey.com Zen Master Of The Internet® President of The Psycho-Cybernetics Foundation

Just want you to know I get great advice and at least one chuckle… or a slap on the forehead “duh”… every time I read your emails!

Carline Anglade-Cole AWAI’s Copywriter of the Year Award winner and A-list copywriter who has written for Oprah and continually writes control packages for the world’s most prestigious (and competitive) alternative health direct marketing companies www.CarlineCole.com

I’ve been reading your stuff for about a month. I love it. You are saying, in very arresting ways, things I’ve been trying to teach marketers and copywriters for 30 years. Keep up the good work!

The business is so big now. Prob 4x the revenue since when we first met… and had you in! Claim credit, as it did correlate!

I wake up to READ YOUR WORDS. I learn from you and study exactly how you combine words + feelings together. Like no other. YOU go DEEP and HARD.”

I love your emails. Your e-mail style is stunningly effective.

Ben might be a freaking genius. Just one insight he shared at the last Oceans 4 mastermind I can guarantee you will end up netting me at least an extra $100k in the next year.

Ben Settle is a great contemporary source of copywriting wisdom. I’ve been a big admirer of Ben’s writing for a long time, and he’s the only copywriter I’ve ever hired and been satisfied with

Ken McCarthy One of the “founding fathers” of Internet marketing www.KenMcCarthy.com

I start my day with reading from the Holy Bible and Ben Settle’s email, not necessarily in that order.

Of all the people I follow there’s so much stuff that comes into my inbox from various copywriters and direct marketers and creatives, your stuff is about as good as it gets.

The f’in’ hottest email copywriter on the web now.

Tom Woods Senior fellow of the Mises Institute, New York Times Bestselling Author, Prominent libertarian historian & author, and host of one of the longest running and most popular libertarian podcasts on the planet www.TomWoods.com

I’ve read your stuff and you have some of the best hooks. You really know how to work the hook and the angles.

Ben writes some of the most compelling subject lines I’ve ever seen, and implements a very unique style in his blog. Honestly, I can’t help but look when I get an email, or see a new post from him in my Google Reader.

The only copywriter I endorse (no affiliate) is @BenSettle.

There are very, very few copywriters whose copy I not only read but save so I can study it… and Ben is on that short list. In fact, he’s so good… he kinda pisses me off. But don’t tell him I said that. 😉

We finally got to meet in person and you delivered a killer talk. Your emails are one of the very few I read and study. And your laid back style.. is just perfect!

There’s been a recent flood of copy writing “gurus” lately and I only trust ONE! And that’s @BenSettle

I’m so busy but there’s some guys like Ben Settle w/incredible daily emails that I always read.